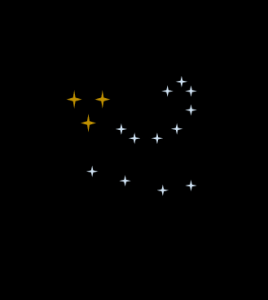 of the Southern Sky

To say the name is to say the story.

Long ago when we people struggled for survival, we found a friend in the wolf. Yes, often he tagged along as we hunted, waiting for what we left, but soon we discovered that in the morning the fearsome creature left tracks to the new trails of the herd we followed. And soon our relationship grew, each helping the other feed our families.

Around the fire at night, we would see their eyes out in the tall grass or peeking by the pine.

The children would throw scraps to them, and soon they moved in closer, but not too close.

One day, our small one slept under the stars, and when she opened her eyes in the morning, there, a few feet from her, lay a small pup, his head facing her, nose pointing to her as its head rested between its front paws. Brown eyes blinked.

“Three brown dots,” she called out.

The pup’s tail curled up, but all else did not move.

“Three brown dots,” she called again, and tossed a scrap of dried venison to the pup.

And so it was, “Three Brown Dots” and the child became friends, keeping their distance, but knowing each other.

Many moons later as the child became a woman, her friend did not return one morning, and so after days, our people mourned the loss of our “Three Brown Dots.” As we told the story, the young woman looked into the sky and saw there in the southern sky, three twinkling brown stars. And soon she saw her friend, walking in the sky, looking down at her, tail curled.

And if you say the name, say the story.

In Memory of Our Three Brown Dots 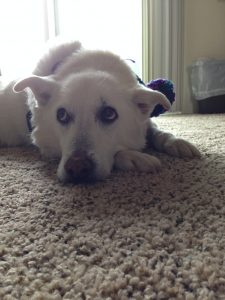 Have you created your constellation? Or your story? Please join the 2014 Constellation Collaboration by