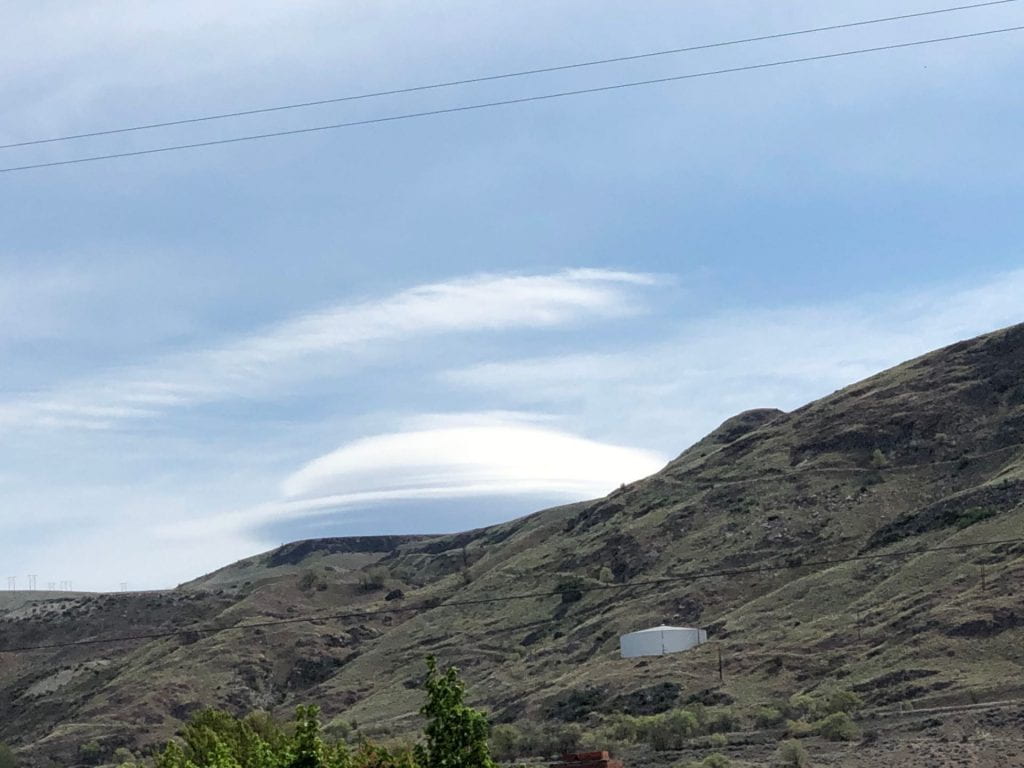 My husband and I want to report a UFO.  It was hovering above the hill across the river from our house.  Clearly, it’s a UFO— no cloud would look like that. It’s a disguise, but not a very good cloaking device.

When I was about ten years old, I was walking home in the dark after supper with a friend during winter with three feet of snow covering everything. As we were cutting across the school playground, the entire neighborhood suddenly burst with a blue-green light. There was no noise, nothing in cloudy sky– but every where as far as we could see was lit up in this blue green light, which just as abruptly turned off. Eerie.

Sightings of UFOs were mentioned in the news the next day —- did we see it?

You may have heard  that the Pentagon has released videos of jet pilot video images of possible UFOs.  Many are reporting about it, like here at CNN.

So, what do you think?

Phil Plait, @badastronomy, an astronomer and head science writer for  Bill Nye Saves the World on Netflix, writes his ideas about the videos: SO, THOSE NAVY VIDEOS SHOWING UFOS? I’M NOT SAYING IT’S NOT ALIENS, BUT IT’S NOT ALIENS.

He puts all three videos together:

Next, there’s this docutainment, The Nimitz Encounters [32 minutes]:

All I know is that we need Captain Picard and the Enterprise back on Earth. And, according to the physics of the universe I know, there probably are not alien ships roaming around the universe.

NASA: Aliens Among Us

Your turn– what can you discover—- or what do you wonder about? Gather resources and consider the implications, issues, and solutions.

Try the Question Formulation Technique to plan your inquiry and Think Sheet.