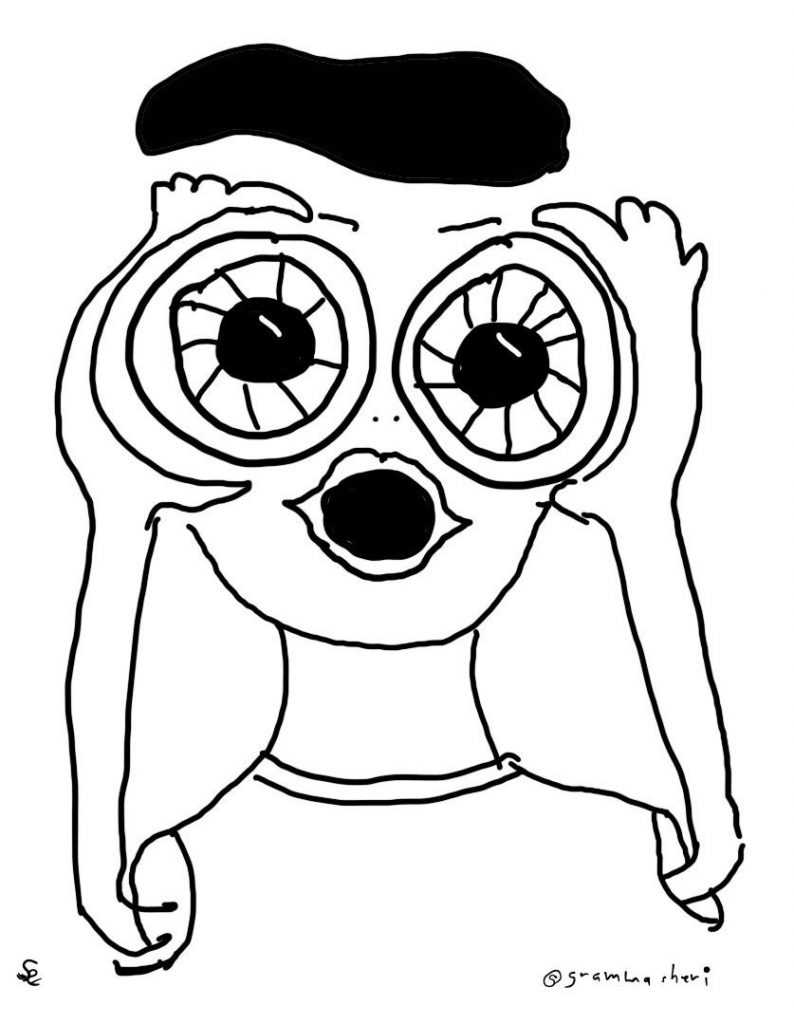 Photography: A Dasher or Designer?

I see interest; I spot oftentimes what others don’t see. But still I’m a dasher– I quickly snap that iPhone picture. If I have time, I’ll pause and think about light, rule of thirds, and contrasts, which are mentioned in our #netnarr photography tips.

Reviewing my Safari Dash Twitter Chat photos, what did I do by design or by dash? What could I have done? 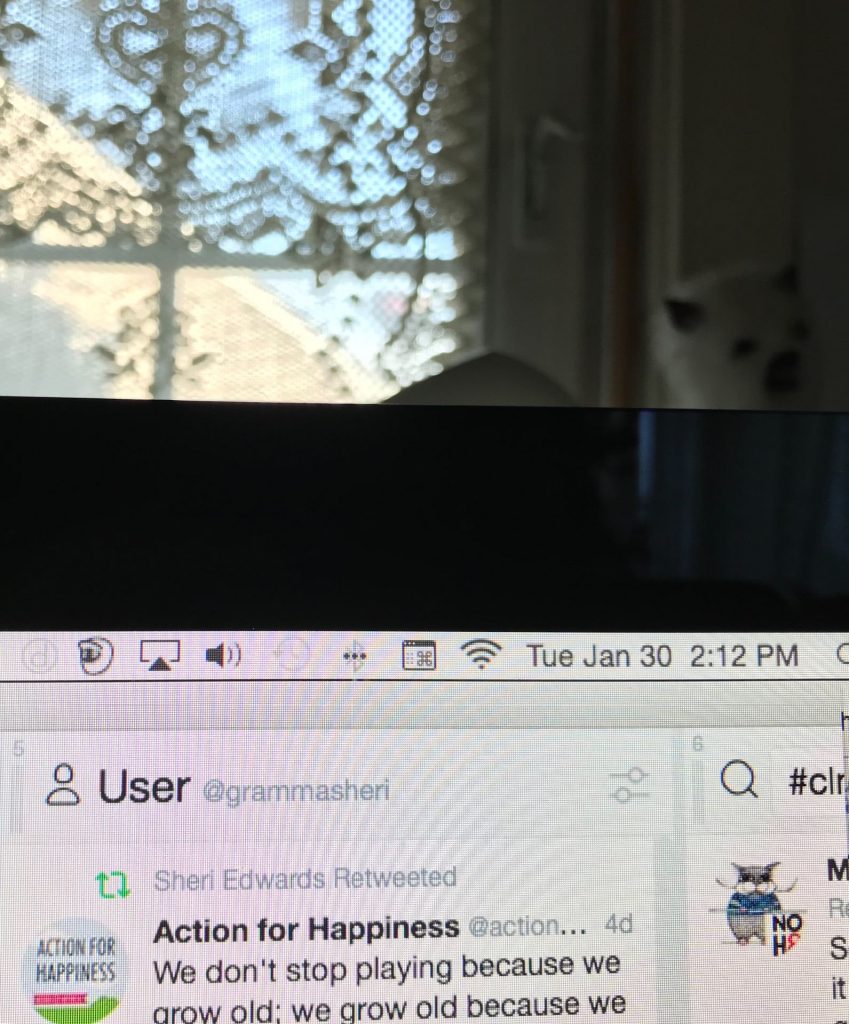 I got the user and time, and the Kachina teacher doll — but it’s certainly not balanced in any way.

How about just the time and TweetDeck: 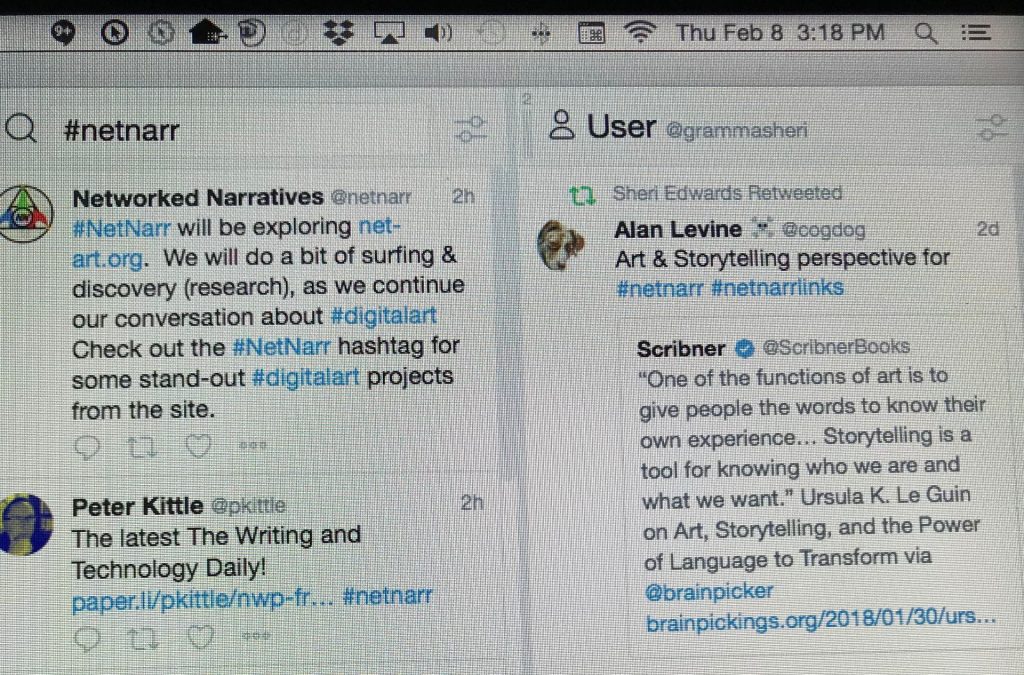 It’s still boring, but does capture NetNarr in the content. I’m able to edit the image right away to keep the content contained. It meets the requirements, but is not as clever as Patrice, who was able to capture time zones in a row above a map.

The time I started my twitter safari in all time zones #netnarr #timezones pic.twitter.com/ayc43B7G94 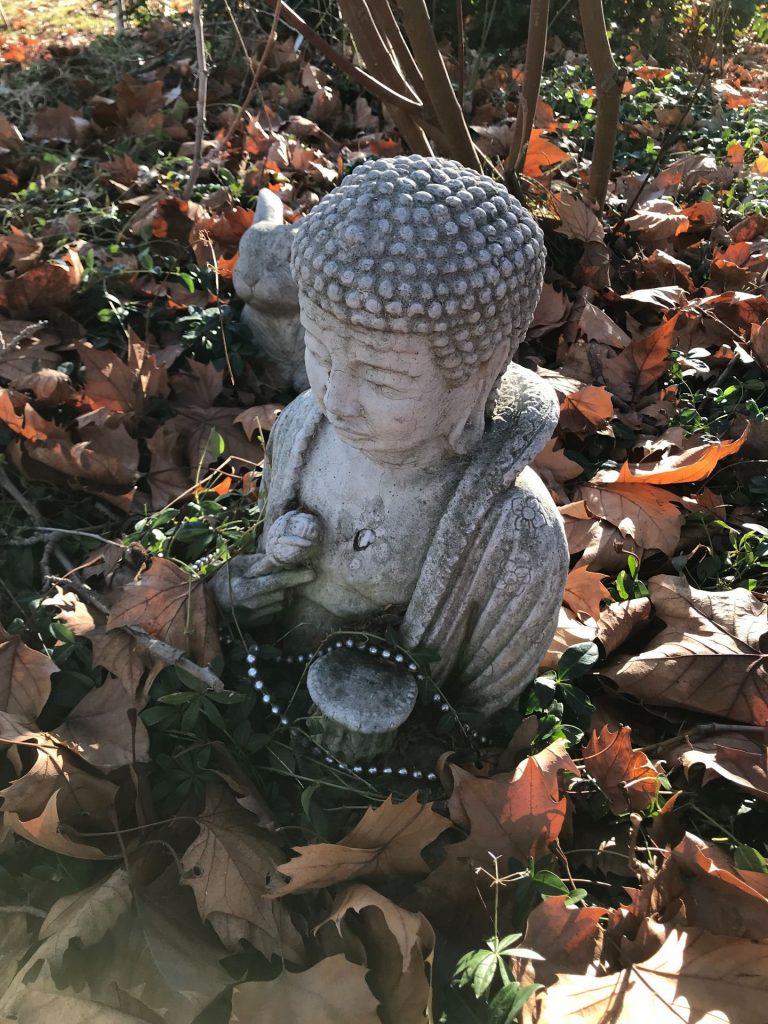 I like this one – I like the light on the leaves and the buddha in shadow. I should have moved just a little to capture the bunny better. I was trying to get the sunshine and not all the yard mess around the yard. Today, no sun,but a step to the left [and a scratch from the rosebush], captured both: 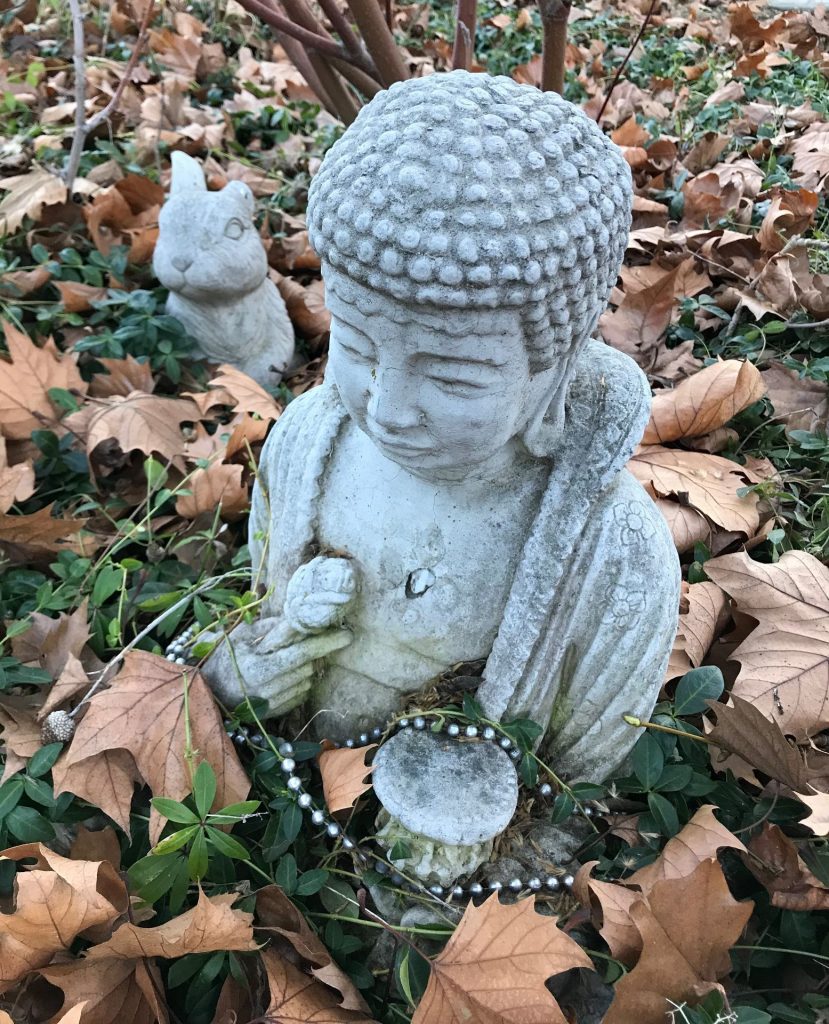 Could you just see a little bunny stopping to consider the buddha? 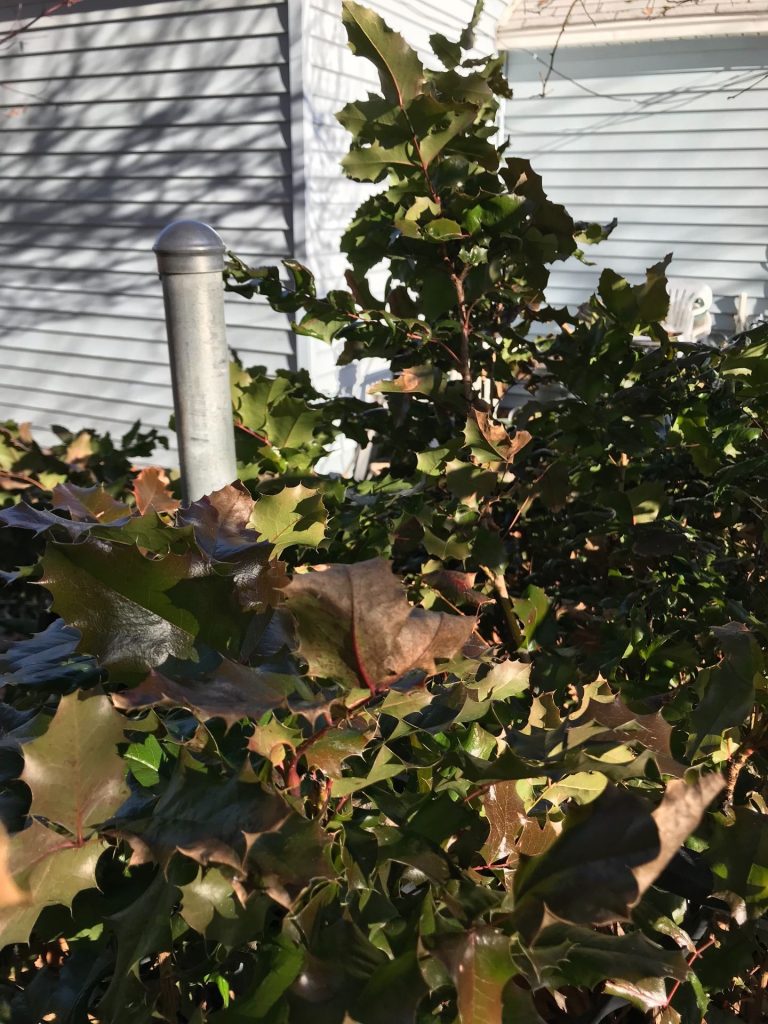 There isn’t one color here– time was pressing, and I snapped and dashed without even editing to make it one color.

I could have gathered calm from the buddha and paused to zoom in: 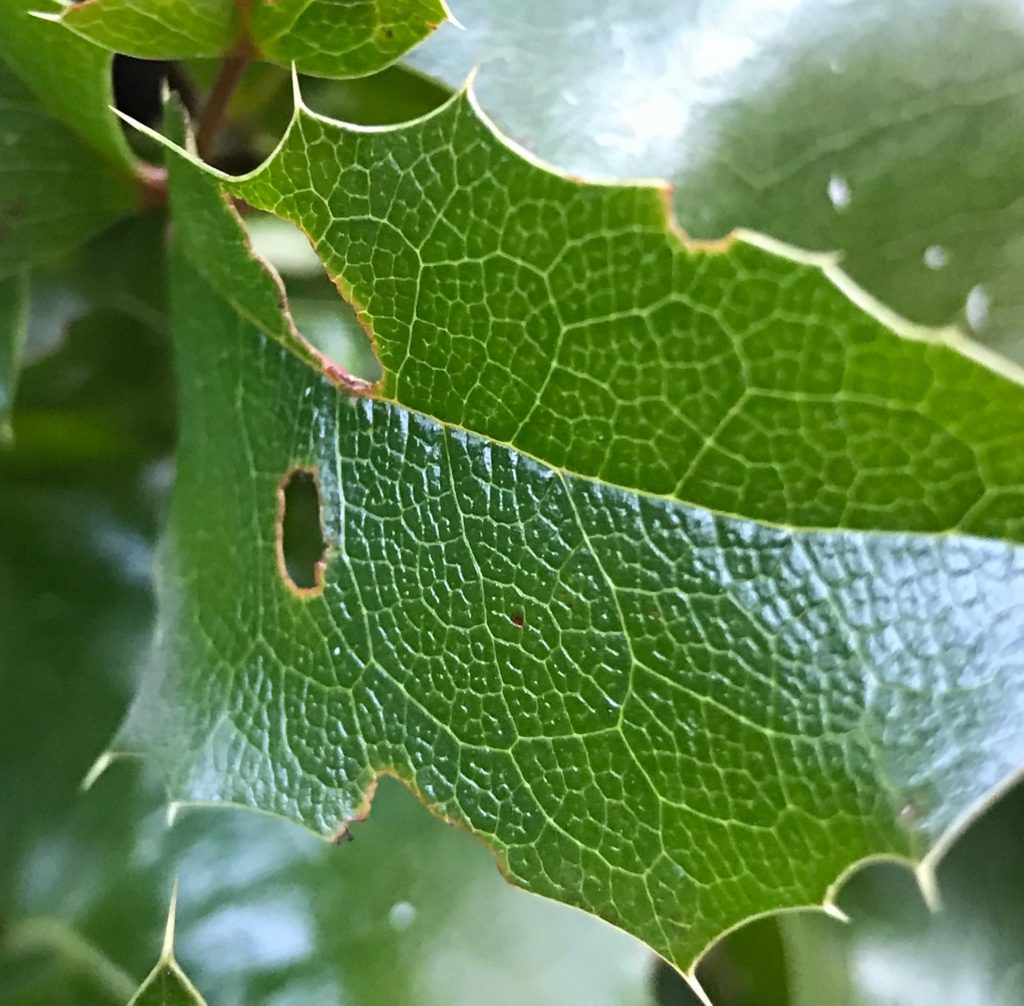 I love that the iPhone can capture these close-ups. The eye follows the leaf’s midline to the holes and back again. Not perfect, but better. 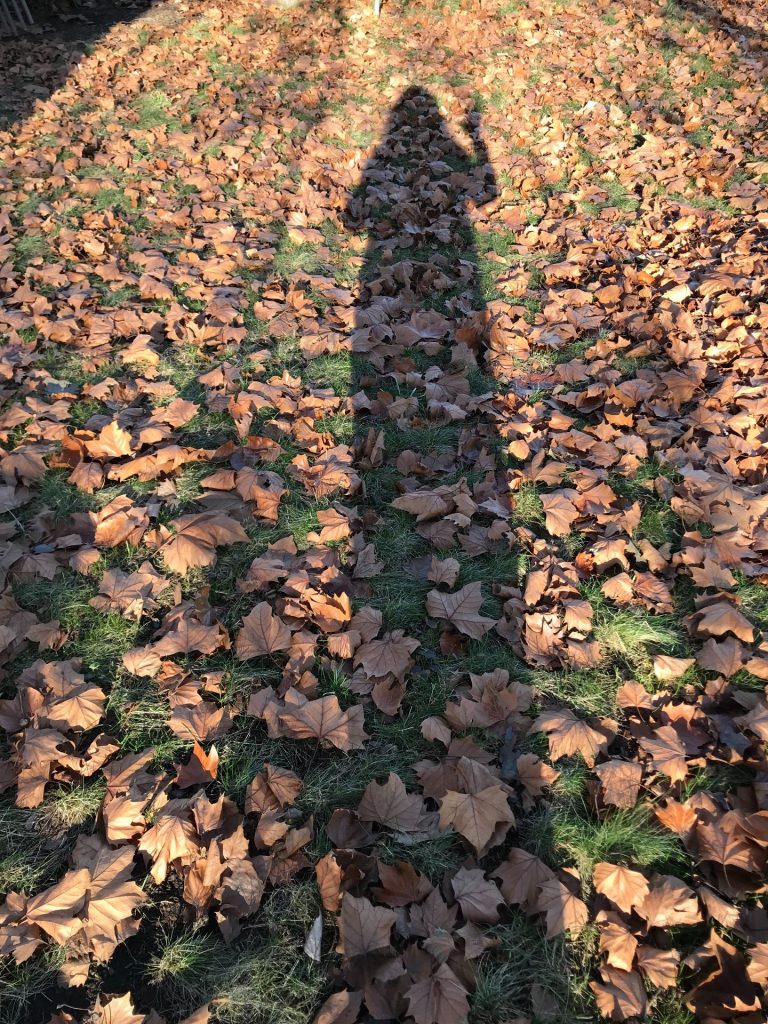 I like this one– perhaps I could have captured closer to the head to better view the “Live Long and Prosper” hand sign. But I do like the vertical shadow lines parallel with my shadow. It’s like the little trees are my company, and lead us up through the picture. 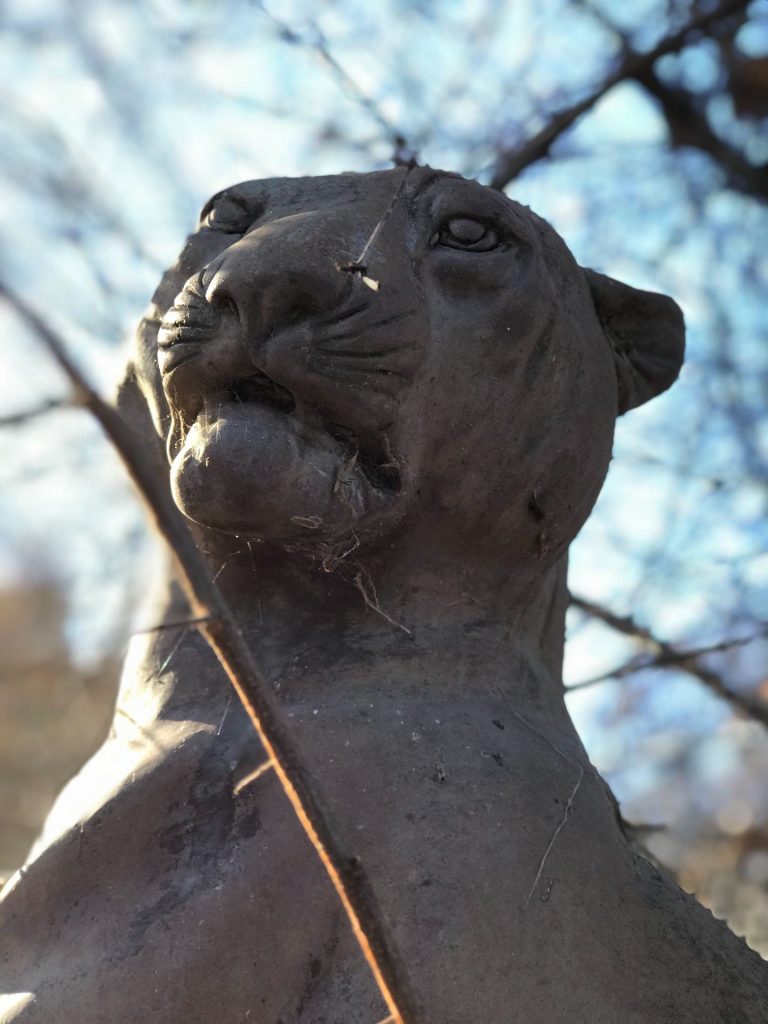 I love our cougar; we have cougars in the area so having one in our yard was an addition to remind our grandkids what we watch out for.  I’m old; getting that angle required some acrobatics beneath the bush branches that I just couldn’t handle at that moment. But… perhaps it just needed more cougar: 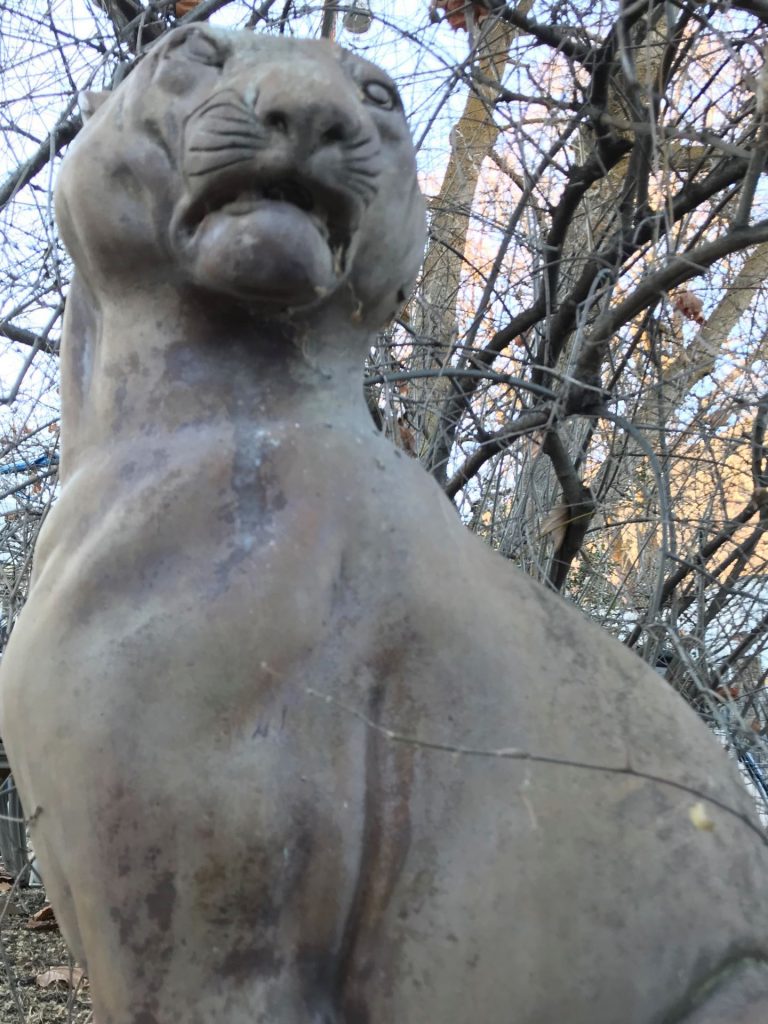 Those jaws. And look how I have no sun in my yard, but the cliff and clouds behind the cougar are shining. Still not a good picture, but better than the first one I didn’t think much about stumbling beneath the bush.

5 Tracks of Another Person 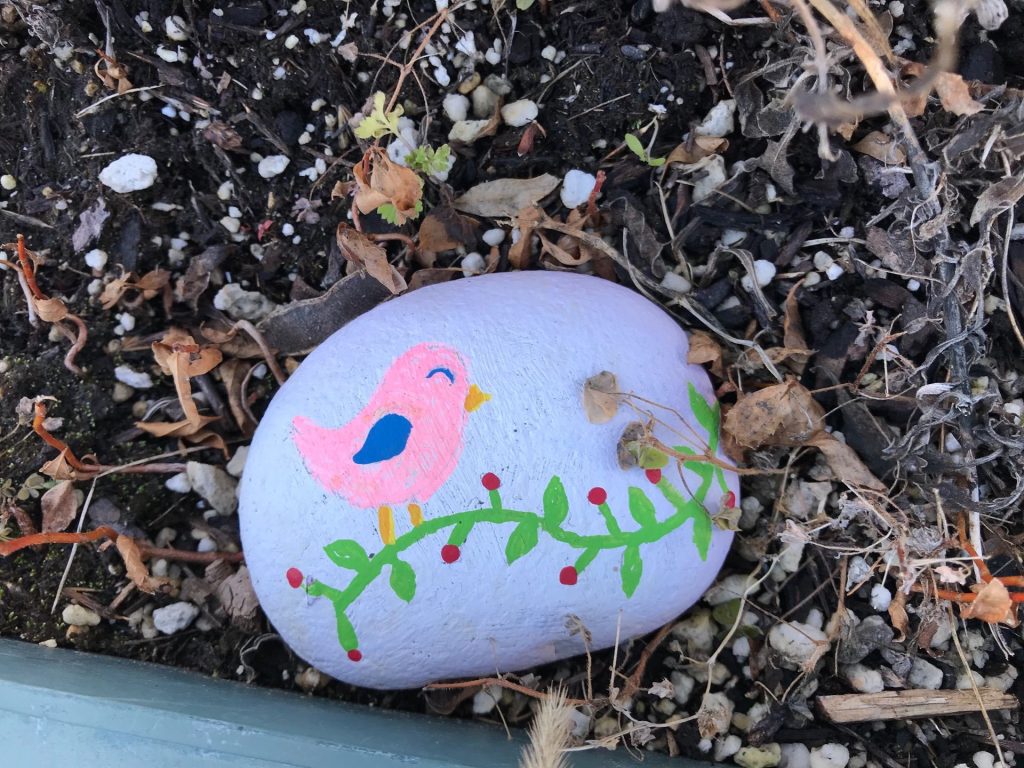 I tweeked this photo of a surprise gift from a neighbor, editing slightly to focus on the rock and the colored vines in the planter. 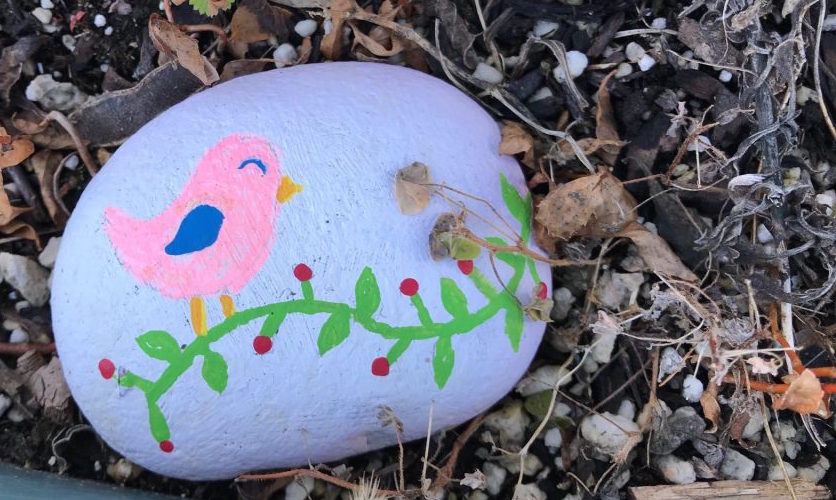 I think zooming in here provides some matching focus of the bird color and its swirled vine to the similar color in the planter and the curls of twigs around it. The bird on the left third matches color on the right third.

6 Two things not belonging together

Some people are quicker and cleverer than I am. 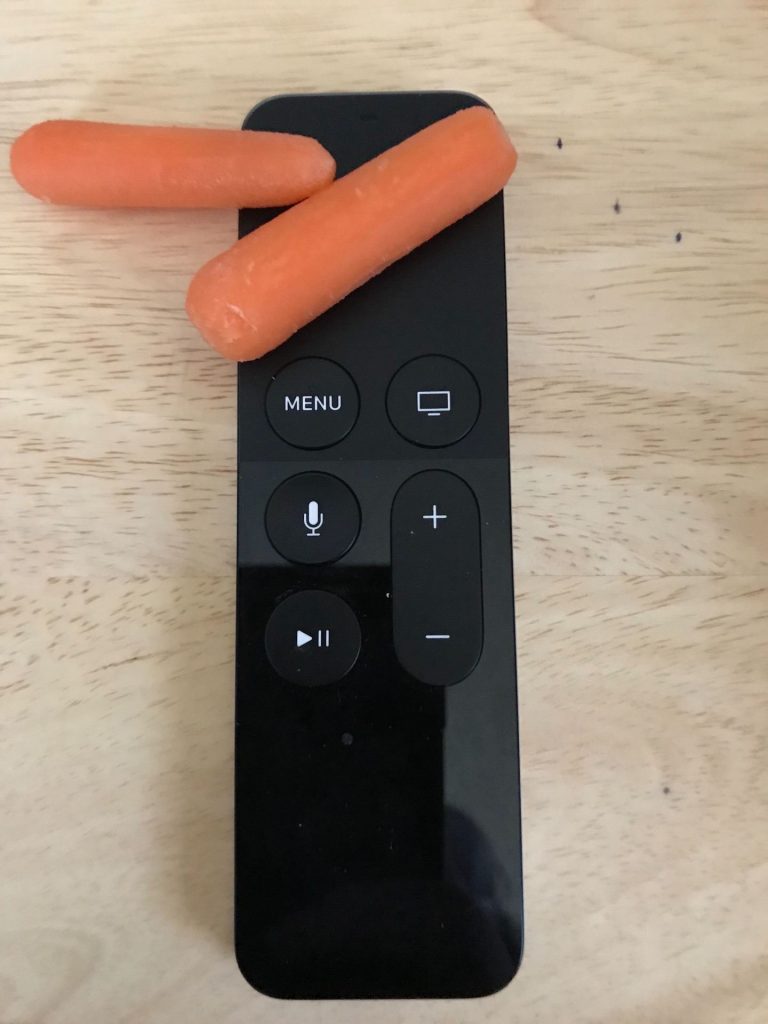 But I like the contrast of three colors here. If I had just been a quicker thinker, this crop would have made it more interesting; as it is, “menu” gets lost. But, here, it’s clear: 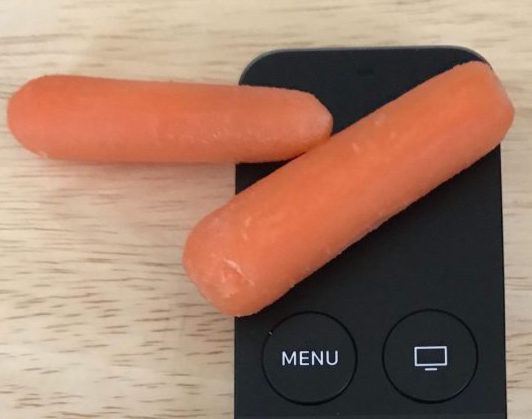 The carrots draw your eyes over and down to “menu.”

7  something not at all digital 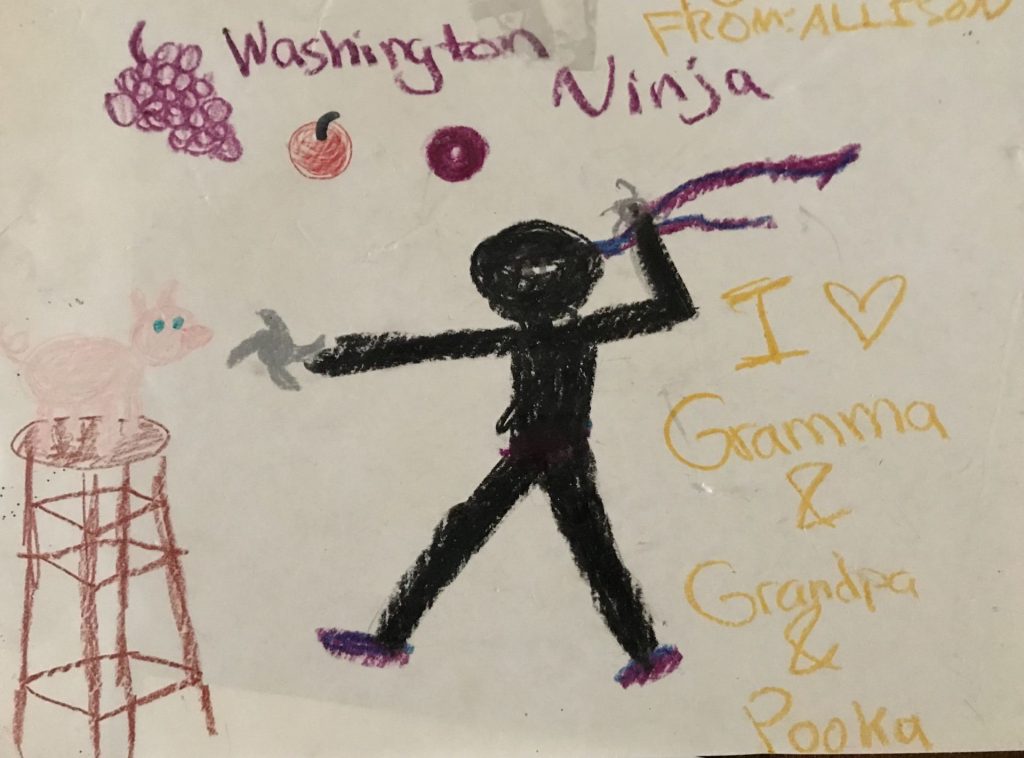 Really, now, how could a gramma crop this to make it better? 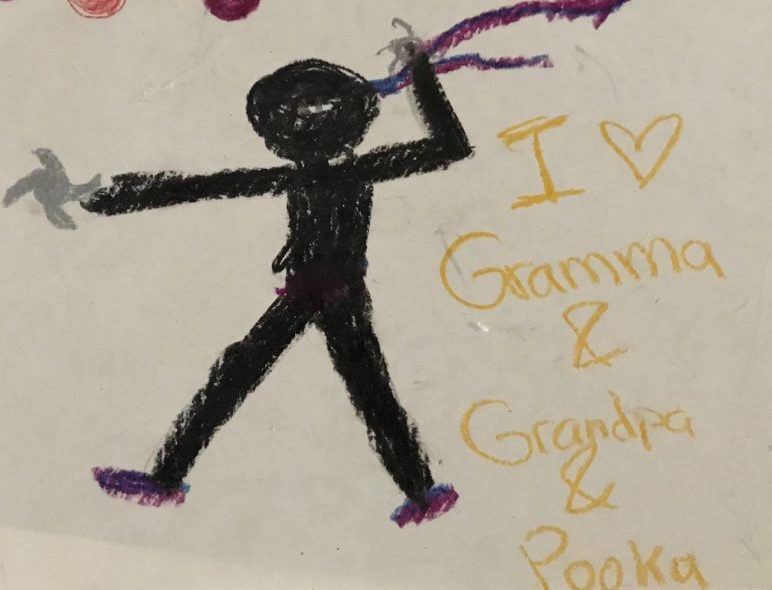 Of course, the backstory is what makes it sweet. 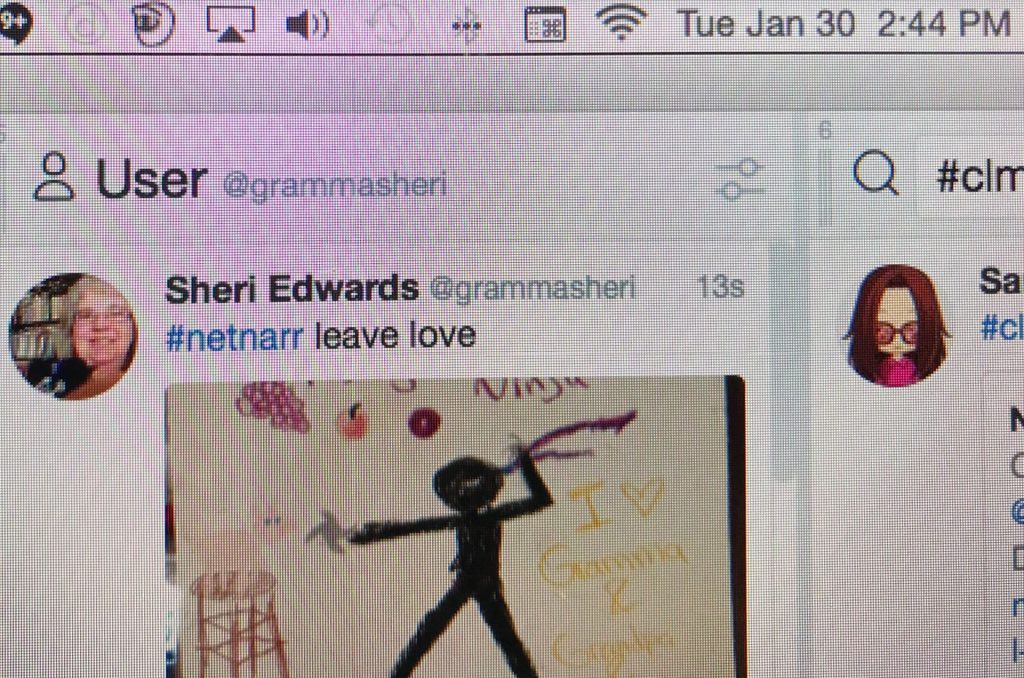 Just a move of the Tweet Deck to the right would have captured the last photo better: 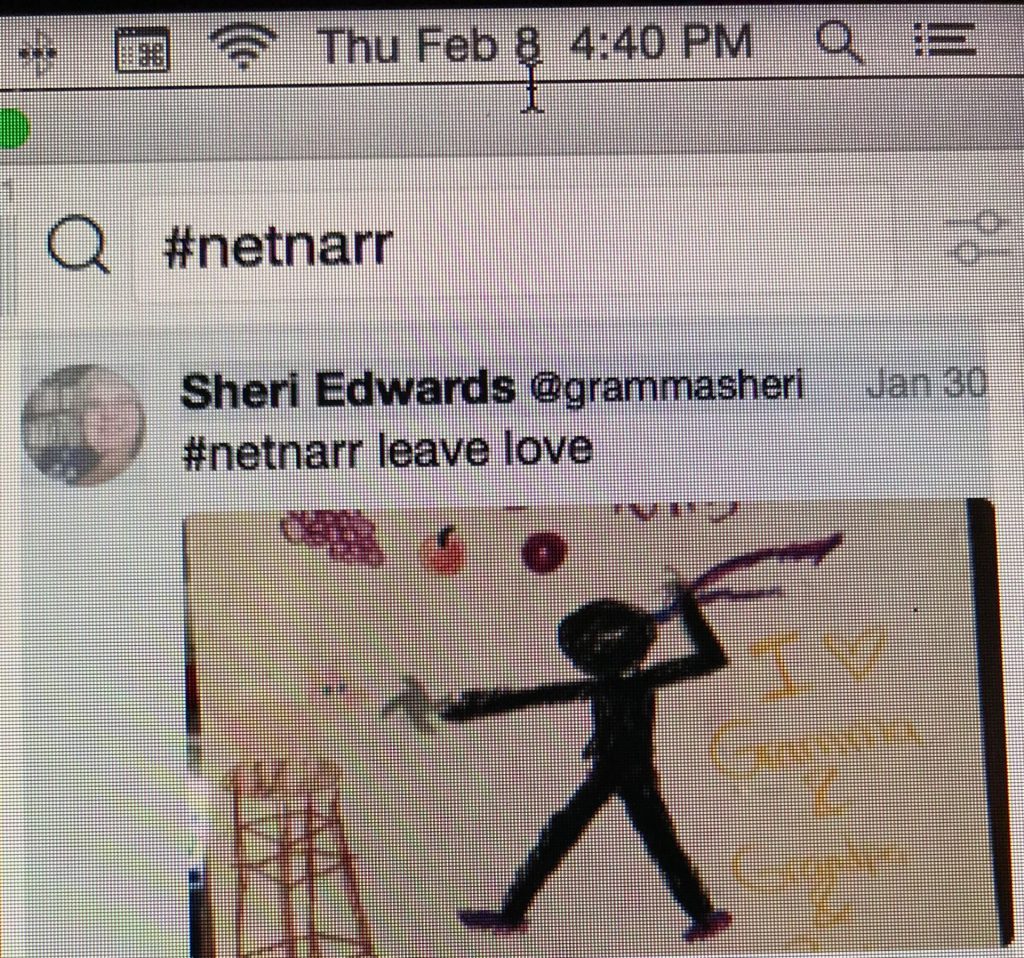 As I review my photography, I realize that one aspect of photography that is very important is the leading lines.

To some degree, the carrots, painted rock/weeds, my shadow, and the green leaf are some attempts at using a leading line: a line that leads your viewer through the photo to a focus.

Hopefully, instead of dashing to snap that photo, I’ll take a deep breath and include some considerations for design:

What have you learned to help your photography? With what other advice would you help me?